I concluded the last newsletter by telling you that I would take it easy in the weeks that would follow, because the schools would not start until March 15. I wouldn’t have thought this period to take much longer than this because of a virus that has turned the whole world upside down.

With the idea in mind that the schools would start again on March 15 and with the message from two friends that told me they would be in Cusco for a few days from March 5, I had planned to drive slowly towards Cusco. And not a little slowly, very slowly! I drove 535 km in 16 days. Yes that can only mean that I encountered great places and people along the way! I’ll pick out a few that I’ll tell you more about.

Visit of the Granny

The first morning I saw several “campesinos” (these are people working on the land) passing by my van. After all, I was standing in the middle of the fields in front of a beautiful rock that, as I heard later, from the locals, had spiritual powers. A small typical Peruvian cute granny knocked on my van. I opened the door. She looked at me wide-eyed and babbled a few Spanish words. “Estas Solita?” that means “are you alone?” I answered that that was correct and she looked at me very surprised. She kept asking me if I was really alone. When she understood, she invited me to get potatoes from her field. Her piece of land turned out to be exactly the piece in front of my camper. We pulled the potatoes together while the granny kept talking to me in her native Quechua language (which I unfortunately cannot understand). What she could explain in poor Spanish is that she wanted to wash the potatoes. We walked towards a very small water source. She took off her (typical) hat that now served as a bucket with which she rinsed the potatoes! Multifunctional those hats! We said goodbye and the lady walked to the place where she sells her cheese to people passing by. What a nice meeting! The granny came back the next morning and greeted me kindly! As a thank you I sang a song for her and her fellow villagers and played on my ukulele the morning I left.

A few days and a few villages later I arrived in Lampa. A beautiful village, where I could park my van on the main square of the village. That was a nice experience because it showed you how the village started in the morning! I tried to arrange a presentation in the municipality and it worked! I happened to run into the mayor who was very enthusiastic about my project and wanted to invite me to speak at an event that week. That’s why I stayed a few days longer and discovered that the carnival was coming. The same day the carnival started, a man with a guitar in his hand came and knocked on my van. “Where are you from?” he asked. I told him about my project and that I also make music. He invited me to participate in the carnival parade that would start in fifteen minutes. And there we went with his friends. Before I knew it, I attended the annual carnival parade of the village of Lampa with the mayor swaying cheerfully from the stage where he assessed the dance groups with some other important people from the village (Each district does a different dance and at the end of the day it will be announced which group has won) 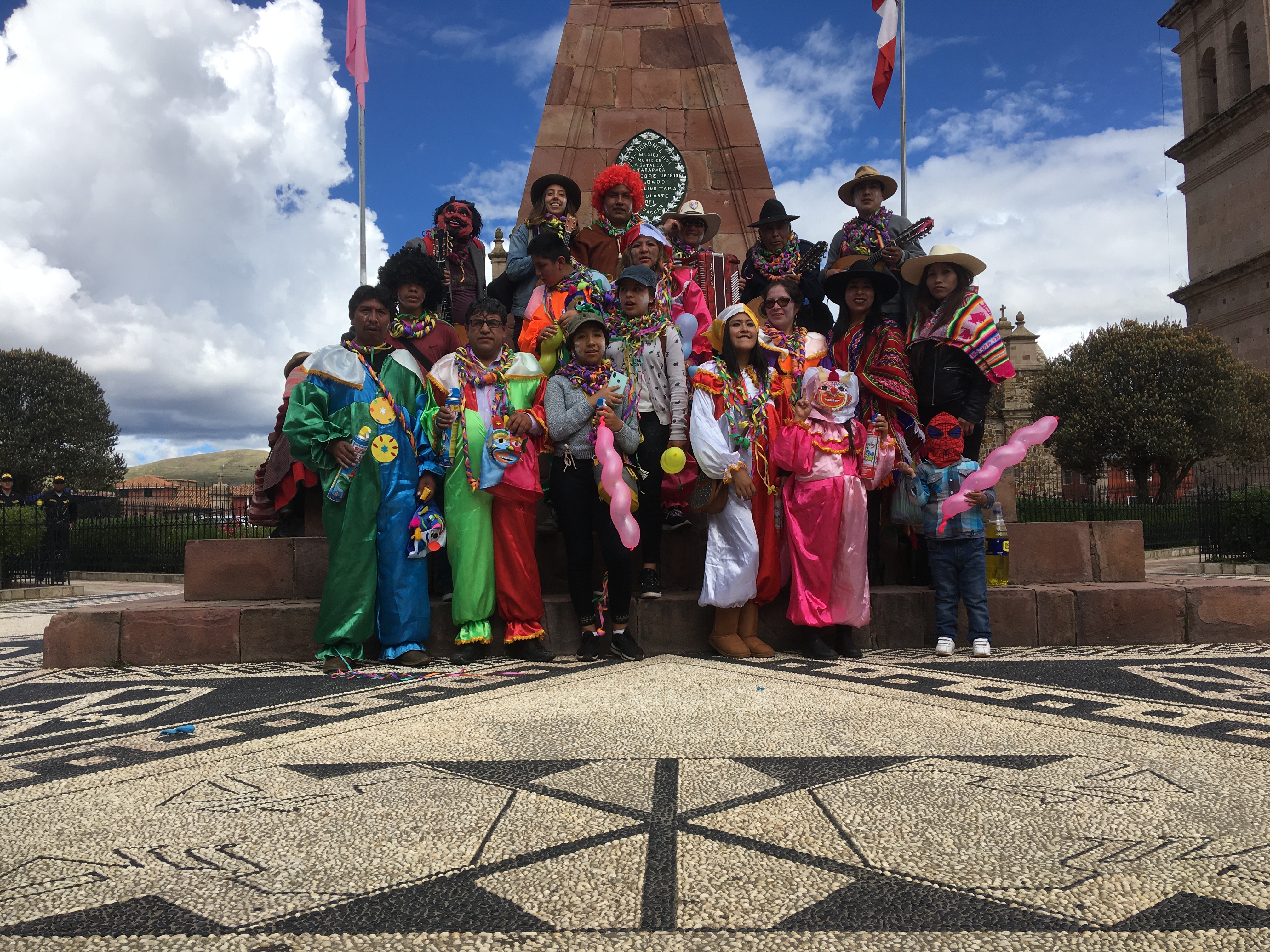 It was a lot of fun and I got talking to one of the band members who is a teacher at one of the elementary schools of Lampa. He said that his daughter is very concerned with climate and the environment and that his family also lives quite zero waste. He invited me to come with his family to the countryside the next day where they celebrate carnival with the whole family. That is a tradition. On that day, each family will thank the “pachamama” which means mother earth and make an offering to the earth. Of course I immediately accepted the invitation and it also turned out that his family was the family who lived exactly in the house where my van was parked in front! That morning his wife immediately invited me to come and eat soup. A little difficult in the early morning but well tradition is tradition. Then we drove with my van to the cottage. 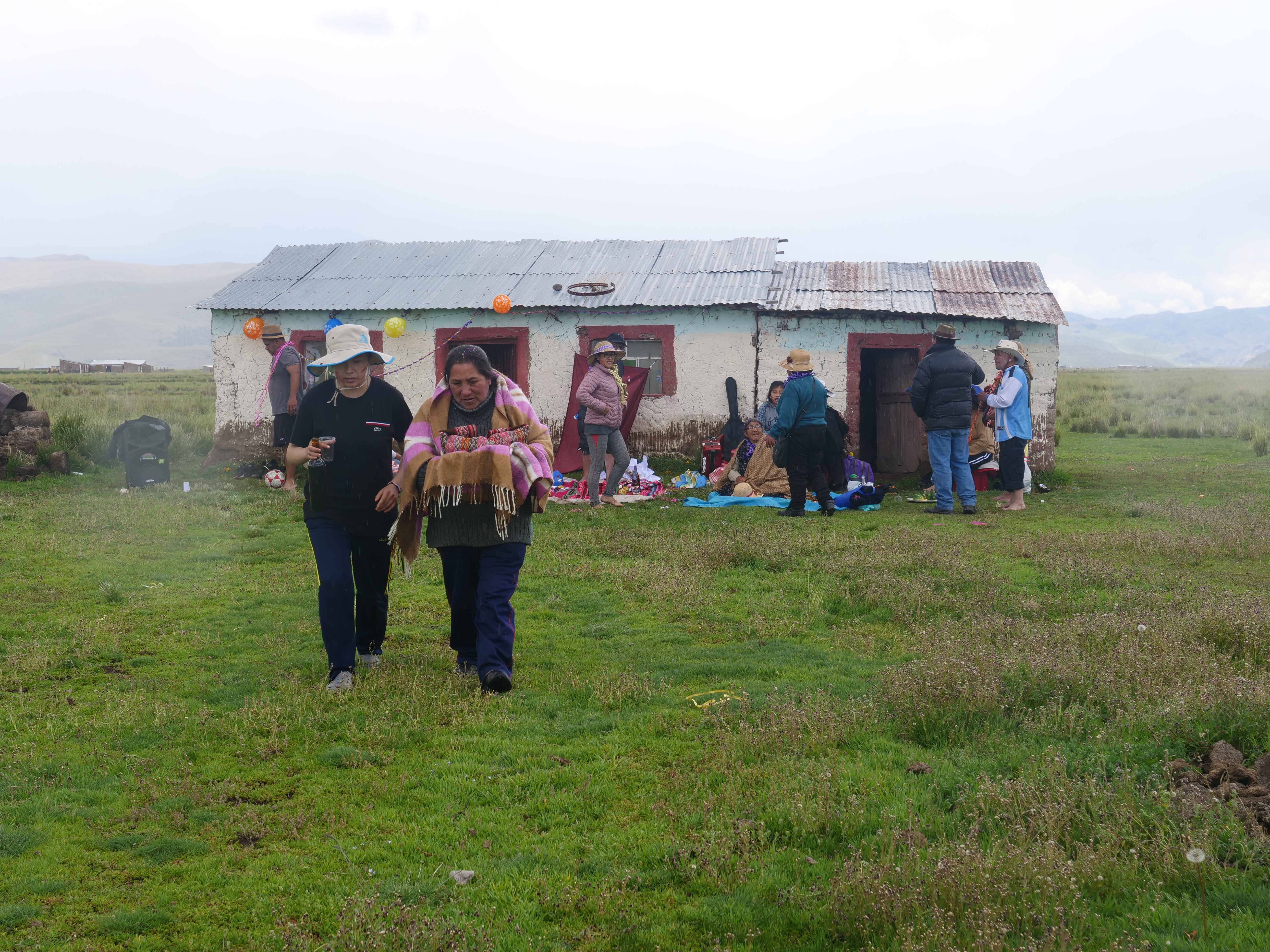 All food was brought and the whole family was present. Every year it is the turn of two different grandchildren to organize this day. This time it was the teacher’s son and daughter who invited me. They cooked and provided everyone with food and drinks. The moment of the offering to “La Pachamama” had arrived. Everyone had to clamp 10 sets of 3 coca leaves between their fingers. Then you could make a wish for each set of leaves and then the whole trade was set on fire. As a offering to the earth. A beautiful ritual! Then the party started. Dancing and singing, wonderfull! I love this kind of music! In the evening the party went on in the family house and I was able to go to my bed when I was tired because my motorhome was parked… yes, in front of their house!

A few days later I left Lampa and arrived at a cheese farmer. I was allowed to park my van there for free and made a beautiful walk! The next day I felt a little sick so I decided to stay another night. I decided to pick-up waste on every place I park my van. This time I did this with the two granddaughters of the cheese farmer. The family invited me into their house in the evening and asked me everything about the sailing trip I had done and the plastic problem. 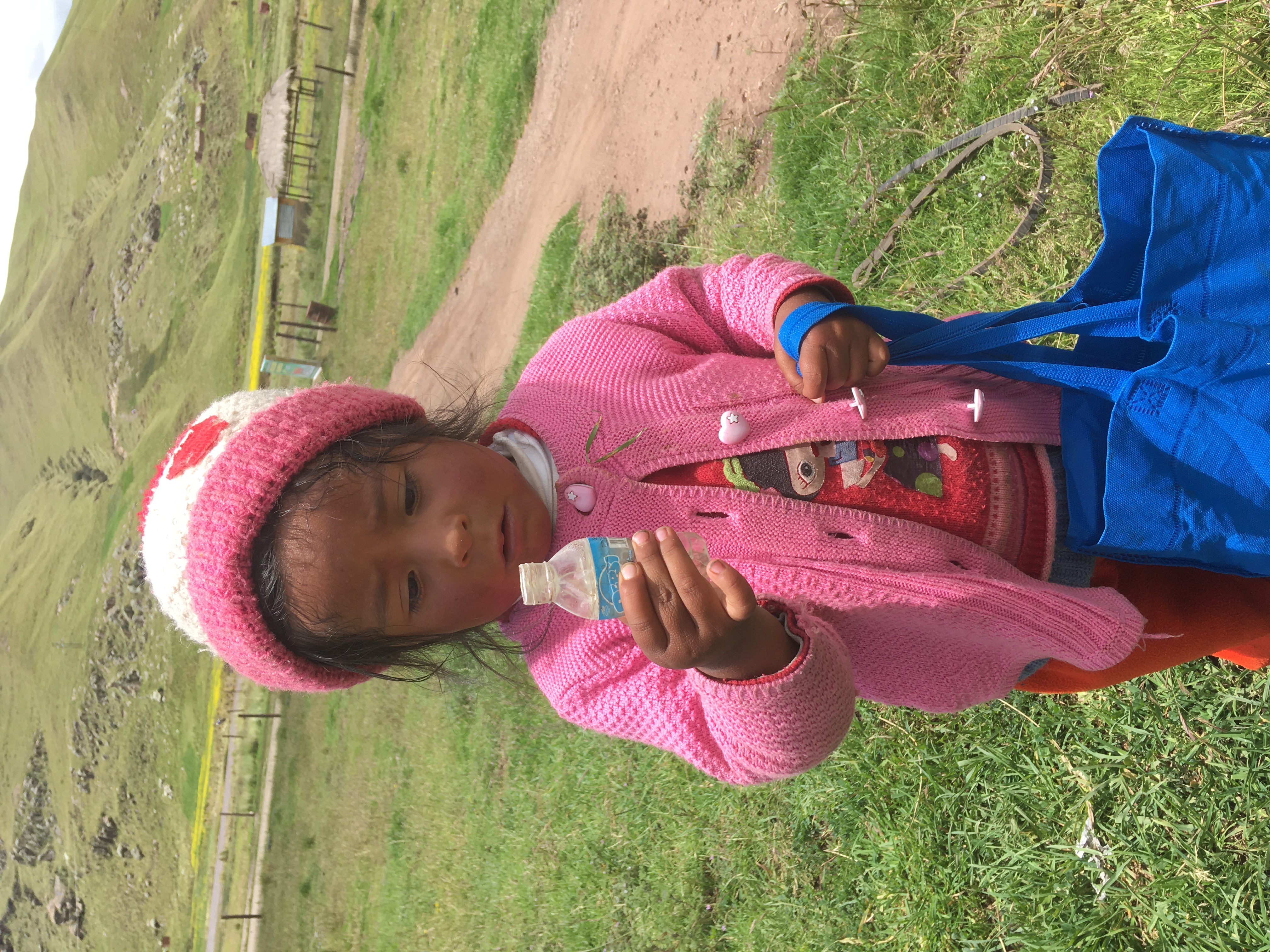 In many villages I passed I went to the municipality that is usually located on the village square, to talk about a possible visit of my project when the schools would open. I wanted to plan my route so that I already had some appointments for the way back from Cusco to Chile. 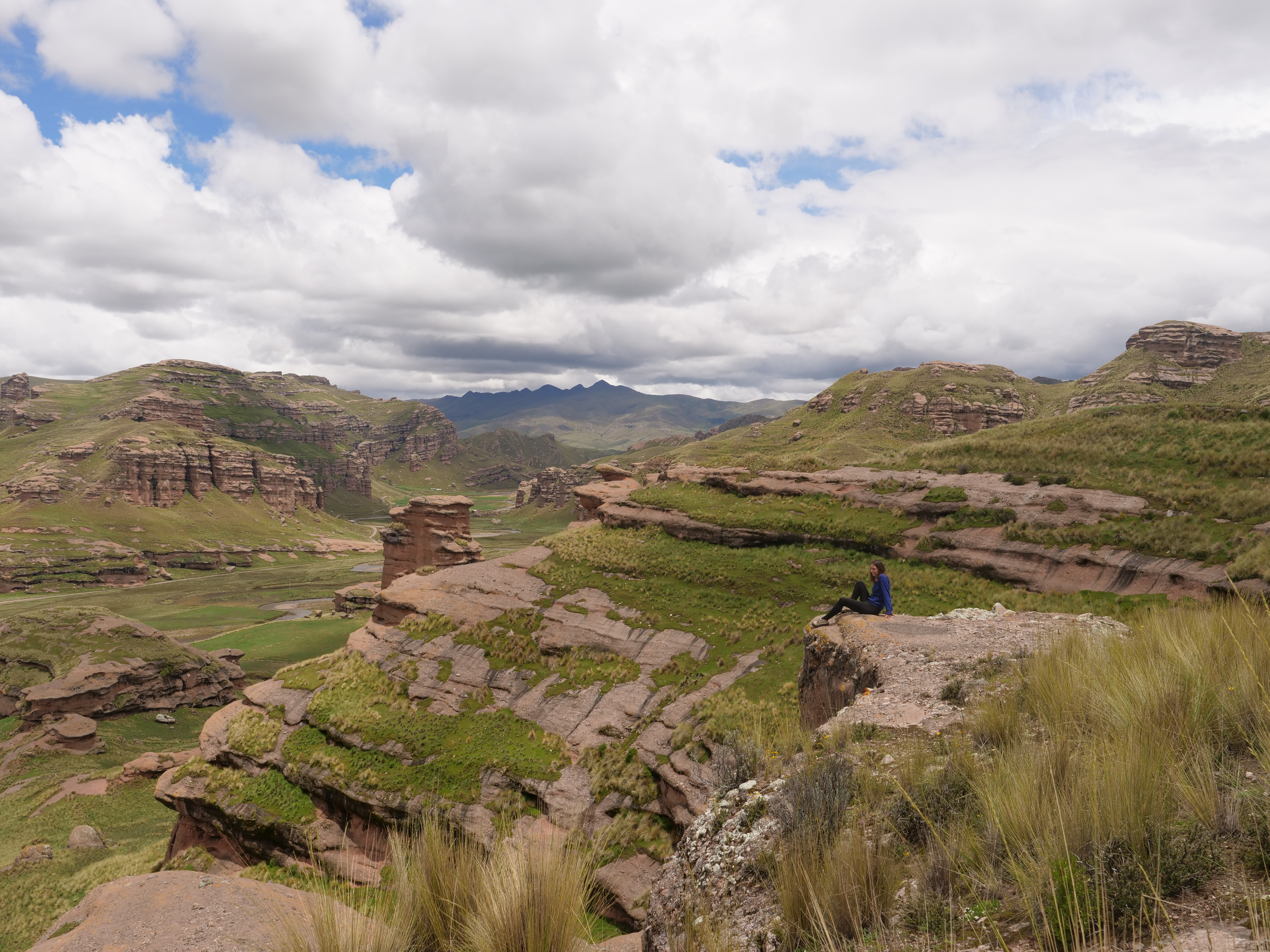 I noticed something was wrong with my clutch and stopped by a mechanic. He said he could help me after the weekend, which is why I stayed at a campsite for two nights. When I came back after the weekend he told me I could better go somewhere else. Hmm two days ago he was already quite concerned that I came from the Netherlands in combination with all the news about Corona. I don’t think he wanted to believe that I had been on his continent for several months and therefore could not have been infected with the virus from Europe. Fortunately, the mechanic at the other side of the road helped me very well and I was able to continue with a good working clutch towards the provisional final destination Cusco!

It was clear that I wanted to stay in Cusco for a while for my project, but that this would take several months I would have never predicted. Read more in the next newsletter coming out soon: no. 15.